Richard has cracked that as well. To have more than two devices on SPI we need device-tree-compiler:

Next is to fetch four-chip-selects-overlay.dts file and execute

That will add two more devices on GPIOs 7 and 8, aside of default on GPIOs 24 and 25. See the four-chip-selects-overlay.dts file.

To enable the overlay you need to edit your /boot/config.txt file to include

This will assign pins GPIOs 24 and 25 to CS2 and CS3 respectively.

You can specify different pins if you want

But, 9-dof data is sensitive and nRF24L01 is quite chatty and can jump-in in the worst possible time. So, it makes sense to offload talking to wheels to separate Raspberry Pi. If talking to wheels goes to PiZero then steering wheels can go there (4 x As5600 and 2 GPIOs per wheel - 8 in total!), too; actually motion control itself. But, since we need (can't avoid) i²c multiplexer for AS5600 sensors, then it makes sense to move VL53L1X to the same device, too.

On the main RPi we'll be left with touch screen (very low frequency, not time issues) and 3x SPI for positioning (9-dof and another device) - four it total.

Now, since code is going to be split across two devices the question was how to mange it. On one device all is managed by PyROS: 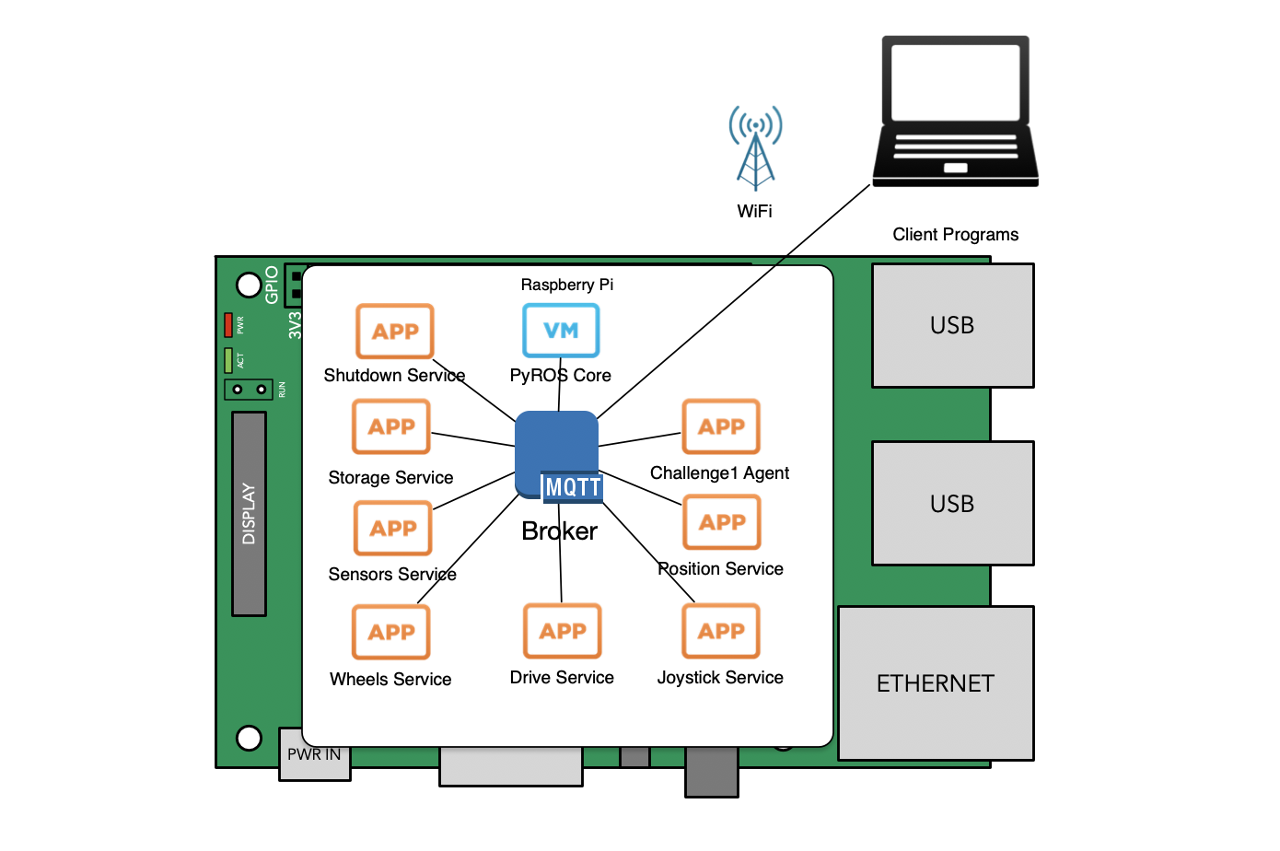 Wouldn't it be nice if the same, central control can be applied to second Raspberry Pi? Since Raspberry Pies are to be networked (look below) then there's no reason for PiZero to use Raspberry Pi 3's (B+) MQTT broker, too!

Total changes to the PyROS were minimal: each process id (name of service/program/agent) now can be prefixed with Pi we want it to go to and only PyROS main process that identifies itself with it (let's call it clusterId - or id within cluster) would react on message. Only 'global' message both react is ps command, but that's fine as result is collected from MQTT particular topic within timeout and if both respond at the same time - two messages are going to be delivered to the client and both processed and displayed. Also, if process id is not prefixed then only 'master' Raspberry Pi will react - in the same way as now.

Another simple change was to provide device identifier through exporter shell variable (CLUSTER_ID) and propagate it to all sub-processes PyROS is maintaining. 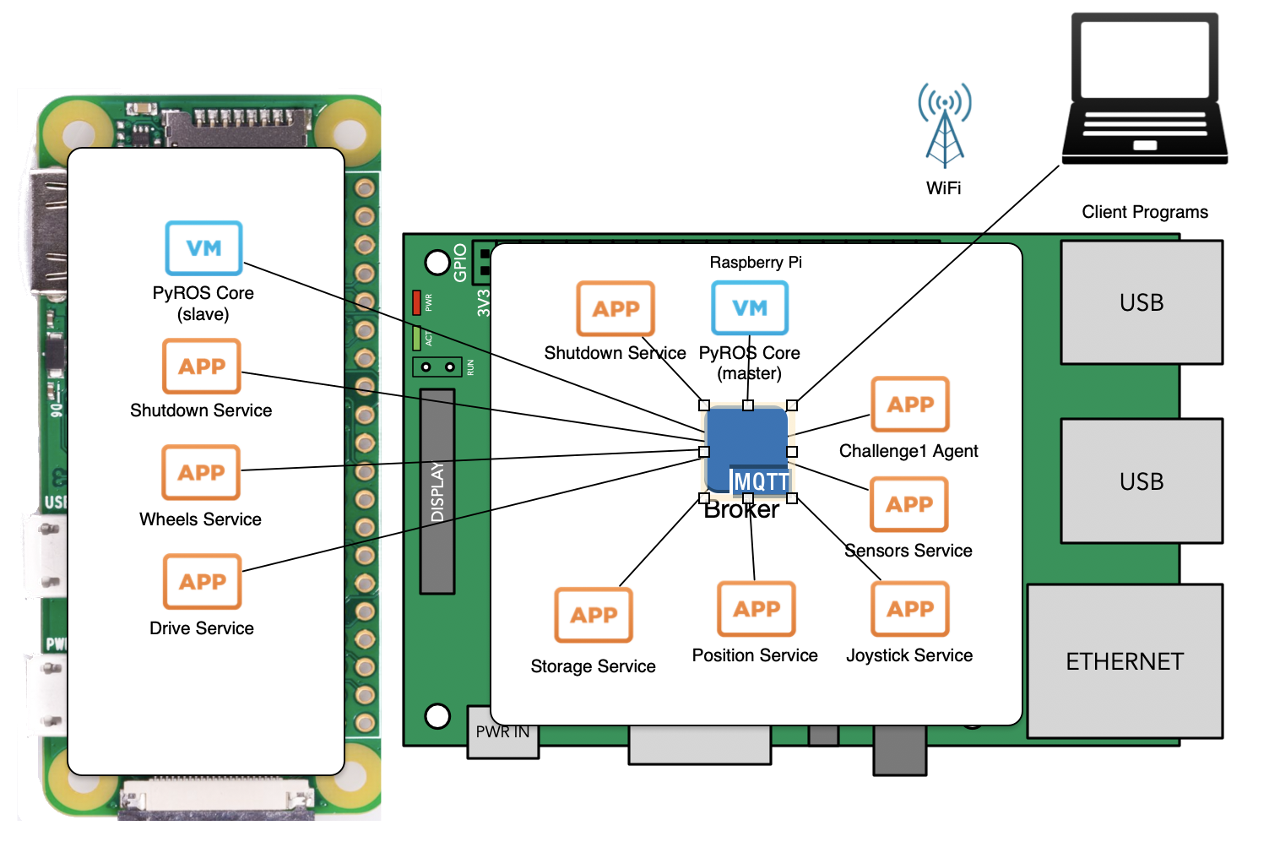 Now, PiZero detailing with wheels is called (imaginatively, right?) 'wheels' and uploading 'wheels' service to it looks like this:

As mentioned above PiZero is going to be networked with Raspberry Pi 3. The simplest way seemed to be using USB for both power and networking. Fortunately PiZeros are well know that can provide 'ethernet gadget' (or 'ethernet USB device') and that is done by adding:

to /boot/config.txt and adding

First we need to allow IP Forwarding by uncommenting line net.ipv4.ip_forward=1 in /etc/sysctl.conf

Next is to setup IP tables to route packets. Manually it can be done by:

But it is not permanent solution. The same setup can be 'dumped' to a file and that file would look like this:

Save such file somewhere in /etc (for instance /etc/usb0_rules). Next is to ensure those rules are added at the time usb0 is attached. The New file /lib/dhcpcd/dhcpcd-hooks/80-usb0:

ensures that rules are run after usb0 interface is added. But we need to tell dhcpcd that we would like static IPs on usb0 interface. It can be done by adding following to /etc/dhcpcd.conf:

Now, we'll apply the same process for usb1 and usb2 and allow two more PiZero devices to be added, too. Why? Well, it is secret for now ;)