It was time to add some Python to the picture. Python is language of choice for the Games Creators Club where we use pygame to make some 2D games (see here for some of the games made in previous years), so it makes perfect sense for it to be the main language for controlling our robot rover.

The method for moving a servo for our rover is quite simple given that most of the work is done in servoblaster (seer Software Part 1):

A simple scp of the python file to the Raspberry Pi and running it has shown that it is quite quick (especially given it is Raspberry Pi 3). But, an scp followed with ssh is something we couldn't easily accommodate on our club as most of members used the school computers that didn't have any of those commands, nor were allowed to be install them. Plus mastering those commands would add more of a bulge to our learning curve. Finally there was the issue how would some controlling device connect/talk to the rover. One of the obvious choices would be bluetooth, but that would require more hardware (bluetooth game pad for instance) and special programs to accommodate. More to add to the learning curve. One of the alternatives is that we could have used sockets and a custom protocol for them, but that would mean learning how to connect to a socket and how to create server socket and accept connections.

In the mean time another alternative presented itself (or rather was kindly suggested by a fellow roboteer on the Robox 3D printer user forum): a MQTT protocol. It is lightweight, has very simple API and Python client (paho) and is supported by the Raspbian distribution (mosquitto broker's package for instance). Next was to organise network so our rover can be accessed from inside of club's WiFi network and/or school computers: 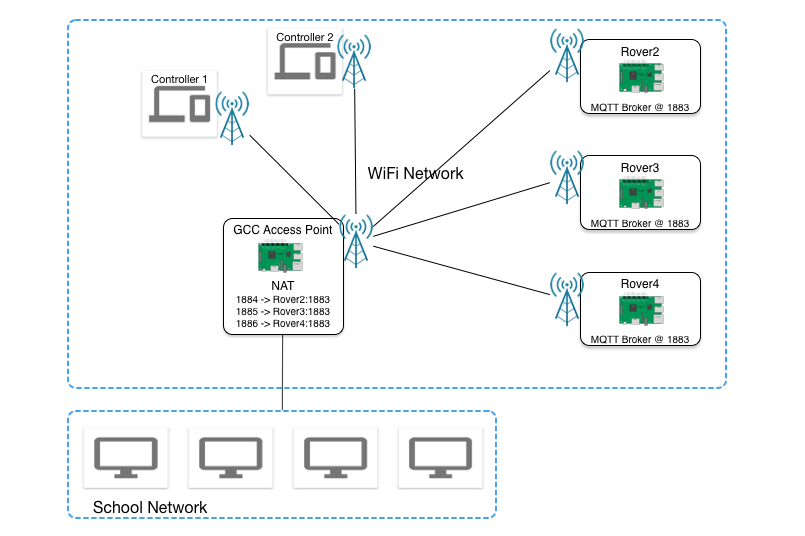 And the last thing was to supply simple way of making programs on school network and then 'executing' them on the rover. That is how our Python Rover Operating System (pyros for short). In essence it is a python process executed as a service (from /etc/init.d/pyros script) which listens to specific topic over MQTT and accepts python code which, then, when requested it executes in a separate python process. Simple! All the output (sysout) from such newly created process is broadcasted back to another topic so we can see the 'debug' output. Some of such 'programs' can be made into 'services' so they are automatically started when the Raspberry Pi boots. A simple python library on the developers machines is responsible to send an 'agent' (or service) to the selected rover and helps displaying the feedback (sysout received is just printed out). For instance our straight line code on the developer's machine looks like this (this is a sketch with unnecessary stuff taken out: Aside of them, there are other services to provide access to the hardware: All services work on specific MQTT topics. Usually one topic is used for listening for commands and another for sending results back. For instance gyro service listens on 'sensor/gyro/read' and 'sensor/gyro/continuous' for one of reading of gyro value or for triggering reading gyroscope ~ 50 times a second. Results are sent back to 'sensor/gyro'.

Since we've mentioned the wheels service there was a problem recently to be solved. Motor controllers are designed to have 'dead' zone somewhere in the middle. That prompted us to 'find' that zone and make wheels service use it. That way speed got four calibration points instead of three. Previously we had '-300', '0' and '300' points to be calibrated - points where each wheel would spin as fast as possible back, would be stationary and would spin as fast as possible forward. Because of dead zone we introduced '-0' point as well. At '-0' wheel would be just one step before spinning backward and at '0' just one point before spinning forward. That way speeds of '-1' and '1' result with wheels moving(*) back/forward.

(*) free spinning wheels at those power levels do not mean rover moving, too.