"Slow and steady wins the race" - Not sure about that, but at least we can go for finishing the race...

Similarly as in previous years, this brought plenty of mathematics. One was to calculate amount rover needs to steer in order to avoid the wall. Math problem is really as following:

we would like to calculate what is the distance of a point from rover we want it to steer around. 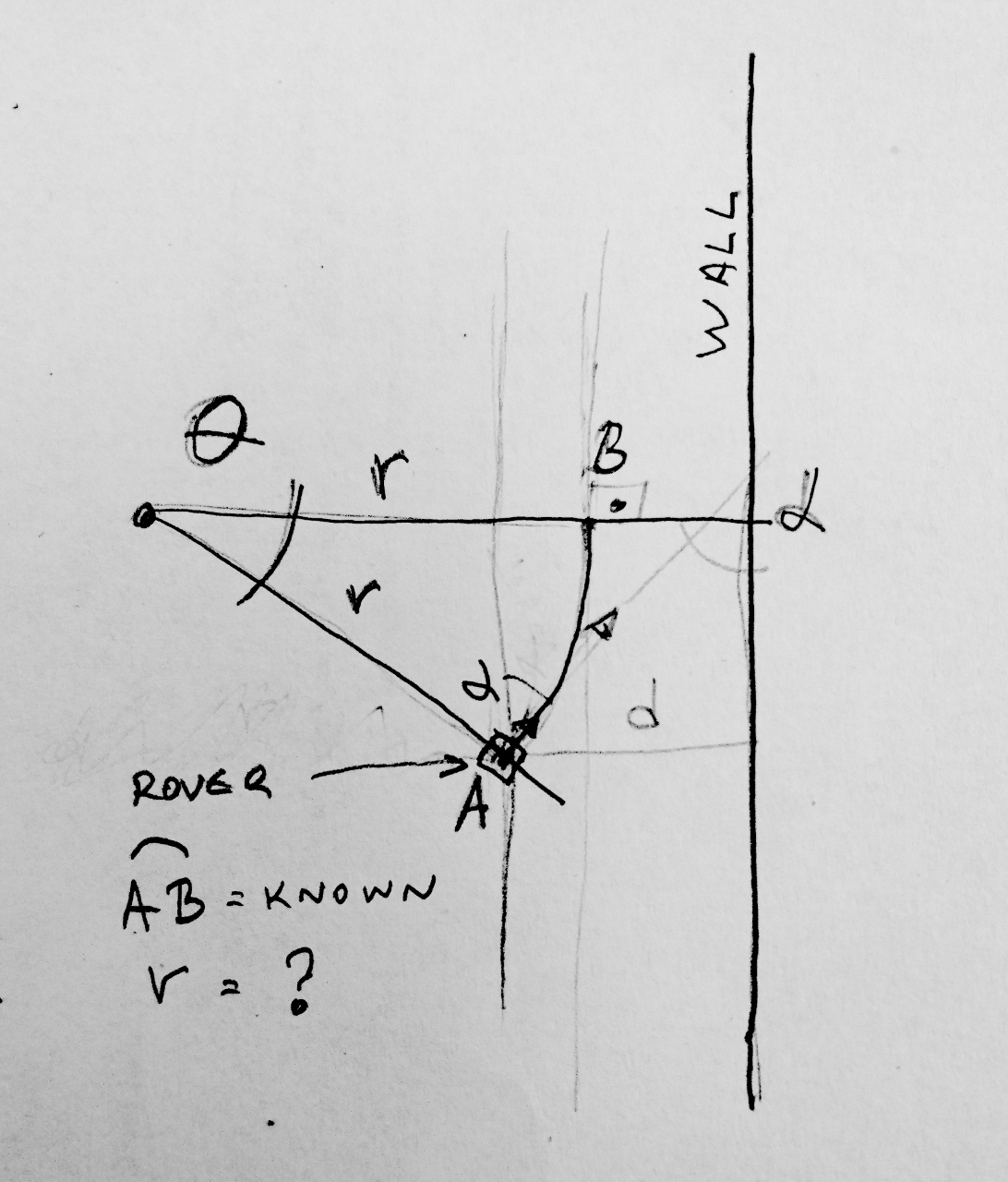 Here we know what arc size is (AB), what distance to wall is (d), angle to the wall (𝝰), we don't know what Θ is but really need to calculate r.

It was interesting seeing how our A level students tackle the problem (coming up with alternate solution and in half the time than me) and how our GCC students do the same.

Anyway - one way to solve it is given on this picture:

Arc length is r * Θ and using Euclidean geometry we can prove from above picture that Θ is really same as 𝝰. From there it is easy:

And length of arch is really speed our rover is travelling.

Wev've had many posts that were mainly pictures; let's have one with some code!

Over last couple of months I've got impression that some people do not regard Python as good, modern language (well it has some of the history to make some people stop and think). As any language it has its good and bad sides along with where it can be used as a really good choice and where maybe not.

Python is quite a high level programming language which had its object orientation added relatively late and some of it reflect in somewhat clumsy syntax. But, there are some other sides of Python that put is at par with other popular languages like Java/C#, Ruby, JavaScript and such. Some of it's syntax sugar is making it even better... And that's what we'll look into here: list and dictionary comprehensions.

would show required positions and speeds of wheels,

would show what was required of rover to do - rotate, drive in straight line at angle or steer around some point at some distance form the rover.

Distance sensors do provide similar messages that look like this:

To transform it from string like that to a dictionary we can use simple code like this:

Let's see what it really does:

is making a list of strings that are separated by given separator (an empty string here " ") and result is:

Next is to take list of strings that are separated by ':' and make a list of two element lists:

Result of it is:

That's called a list comprehension. And in there we can filter elements and/or transform them on the fly. For instance, if we have a list of strings that represent numbers like this:

Also, we can transform list of numbers so we exclude all greater than 2:

Now back to our problem. We've produced list of lists of two elements. Now we can use those two elements and produce a dictionary using first element as key and second as value:

Also, just before using key we will transform it to int and value to float.

So, to create CSV file (which we can use later on for analysing what went wrong) we would like to create a string out of record and back to create a record back of string. But our data and data definitions are in separate arrays. Ordinary solution people would normally go with (and including me before I got fascinated with comprehensions) would go something like this:

But now with comprehensions we can do better. Also, in order to put two arrays together we can use method 'zip' which alternates elements from one and another array. For instance:

but final result is the same)

Now we can combine these two together:

(try simple example from above:

Those are just one aspect of Python that make it interesting and fun to work with. There are much more to the language...